THE ROMAN VILLA AND THE VESUVIAN ERUPTION

As the crow flies, about 20 kilometers separate Positano from Vesuvius. Until recently, few people believed that the eruption that destroyed Pompeii had also affected the Amalfi Coast because of its distance from the volcano and its apparent protection by the steepy Lattari Mountains. Unfortunately, the reality was different. The eruptive column of gas and ash ejected up to 20 km into the atmosphere where prevailing winds then pushed it south. About 2 meters of pumice and ash fell in the Porto gulley—the basin of the Positano Marina—and on a large part of the Gulf of Salerno.

The ash fall did not kill upon first impact since its internal temperature had cooled, but the thick cover of loose and unstable material could not remain balanced on the steep and rugged limestone slopes of the Lattari

The resulting volcanoclastic flows downhill reached a depth of about 20 meters on the valley floor: The prestigious maritime villa lying on the seashore, as well as its contents and its occupants, was doomed. The reactivity of the pyroclastic materials was such that they quickly solidified into a tuff rock, so hard that its modern excavation has to happen with jackhammers. Known locally as “Durece” this material has since been used in construction.

The excavation results indicate how a thin layer of ash first fell on the Villa of Poseides  followed by thick fall of pumice that buried it about 2 meters deep. The sloping roof of the triclinium directed much of the pumice toward the gardens and the external spaces of the villa. 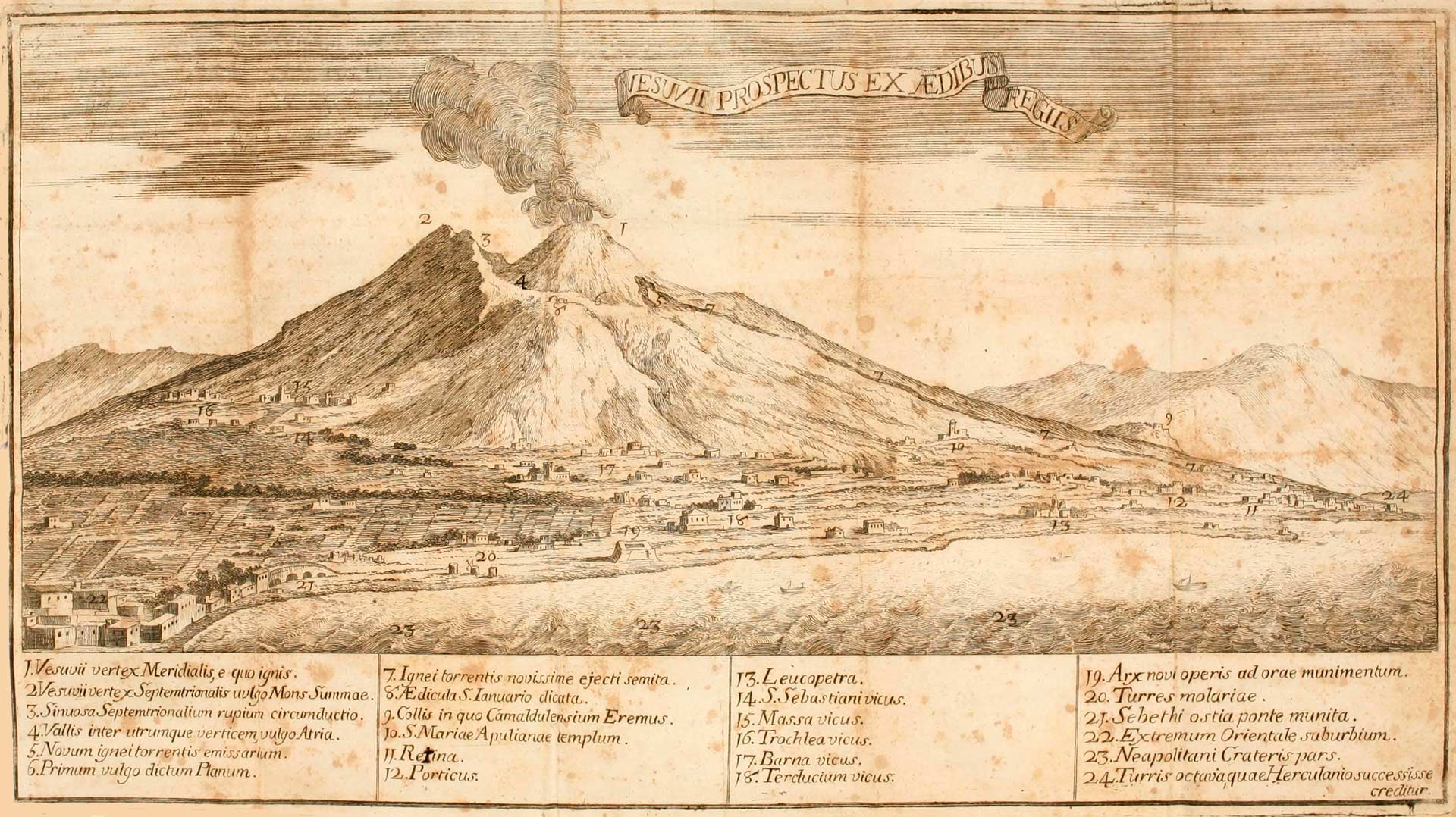 Part of the wooden structures composing the roof and attic collapsed, falling in a vertical position on the furnishings inside the space. At the same time, other lobes of the flow went round the obstacle and, once they reached the peristyle, flowed back uphill into the triclinium up against its northern wall. In the process, the lobes dragged with them columns of the portico, as well as the wooden revetment and coffering of the ceiling, and the beams and scaffolding belonging to the restorations works in progress. Already partially filled, the walls of the triclinium began to collapse under the increasing weight of the volcanic mud flowing downhill from higher elevations. The western wall was smashed into pieces, whereas the northern and eastern walls remained intact but were broken off at a height of 1.5 meters from the pavement.

The upper part of the broken wall(s) moved about

40 cm downhill (as visible in the photo), but did not fall over, indicating that the southern lobe of the flow had already rapidly filled the triclinium. The displacement visible at the height of one the yellow/red carpets painted on the eastern wall is spectacular evidence of the violent forces exerted by the pyroclastic flow.

At the time of the eruption, the villa was undergoing restorations and an expansion because of the damages it sustained by the earthquake of 62 AD, as attested by the remains of scaffolding, a saw, and other tools, but above all by the infill of an earlier cistern on the southeastern side of the complex. The cistern was used a storage space for large blocks of Tufo Giallo Napoletano coming from quarries near Naples and awaiting to be shaped into cubilia (diamond shaped bricks) by patient masons for new walls to be built in opus reticulatum. 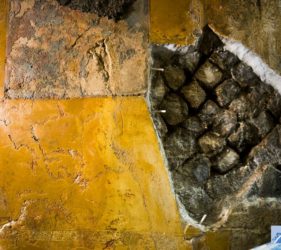 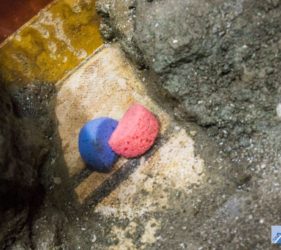 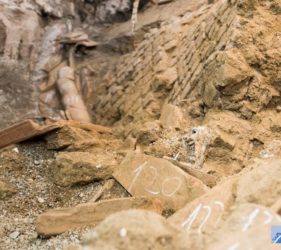 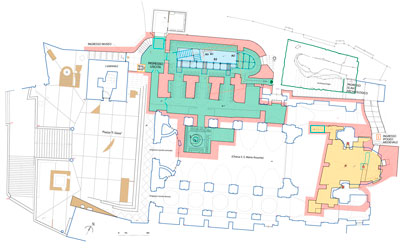